The tl866 has a 40 pin ZIF socket, but that means that it can't talk to all the pins of a 44 or 48 pin chip without more pin muxes. There is an ATTiny13A that is being used as a rudimentary bit of DRM, and it has started causing problems. As of MiniPro version 6.0 certain counterfeit TSOP48 adapters have some flaw that can be detected. The solution would be to either upload Radioman's reverse engineered firmware from here: Link, or to revert to MiniPro version 5.19 and Firmware 3.2.61. This rollback can be done with the Firmware Updater Tool. You can check if your adapter is fake by going to "help/about/tsop48detect". 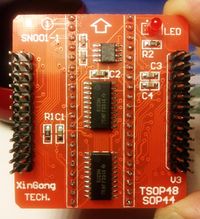 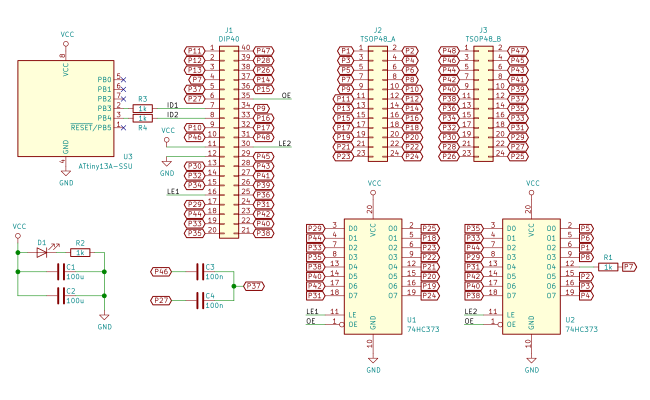 The base kit with the ATTiny base board and the chip adapters it can carry is sold divided into 5 packages, but can often be bought in a batch from eBay sellers. For reference, here is Autoelectrics official package codes.

"simple adapter" means it's just a bare PCB, and you have to solder the chip to it when dumping or programming it. The "hats" without the simple designation has some form of 0-force socket 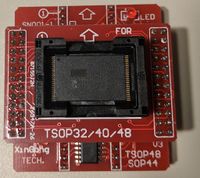 Ok. you don't have the 5.91 version, download it here: Minipro V5.91 and unzip it somewhere in a folder.

Verified by Evan Allen to work, simply clone the git repository from here: Link and open the .cproj file in minipro, program the attiny13 @soic8 from the fake adapter in minipro and resolder. This changes the tsop48detect result from 'fake' to 'V3'.